It was a big day in the garden today: after lifting various matured crops I was finally able to move the tomato plants out of the plastic tents and into open ground. To me this marks a new phase in the growing year, when the root crops like carrots, potatoes and onions make way for softer summery things like tomatoes and lettuces.

Some of today’s Sugarsnax 54 carrots

Out of the ground today came Charlotte potatoes, various beetroots and a row of lovely carrots of the variety Sugarsnax 54. They’re big, crisp and vivid orange in colour. Best of all, there wasn’t even a hint of carrot fly damage. They’ve been under a mesh tunnel for all their life, but I’ve known the dreaded carrot fly to find its way past such barriers in the past, so it was a joy to find today’s haul in pristine condition. 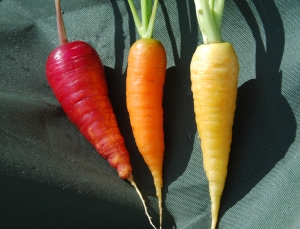 The same went for a row of so-called Rainbow Mix carrots, which came as a handy seed tape. They were damage free, but were a bit small, due no doubt to inadvertently ‘sowing’ the tape in one of the beds that had just had manure mixed into it, which is generally bad for carrots.

Beans made their way indoors too. Seven and a half pounds / 3.5 kilos of The Sutton broad beans made for a good haul. Podded, that went down to 3 pounds / 1.4 kilos, most of which was bagged up and went into the freezer. There are still quite a few growing outside, as I staggered the planting earlier in the year. 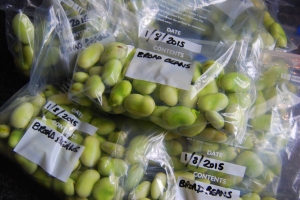 The Sutton broad beans ready for the freezer

There was a good crop of Castandel french beans too. I nearly lost this crop a couple of months ago, when the first plants were ravaged by pests.

But some re-sowing in modules and only planting out when they were strong seems together to have done the trick. Like the broad beans, there are more still growing, for a second harvest later.

Indigo Blue tomatoes – what a colour

As for the tomatoes, we have a good range of varieties on the go:

The tiger starting to show its stripes

There are about twenty plants in total, which feels a lot but there are so many delicious ways to process and preserve a glut of tomatoes that quantity is never a problem.

Some of the tomato plants in their new position outdoors

I rigged up a frame and tied the taller plants to a horizontal cane. They’re still slightly delicate from being in the plastic tents. They were cramped while under cover, with little airflow and it was difficult to trim them. Now they’re outdoors it was easy to spot and pick off side shoots and trim off weak lower leaves. 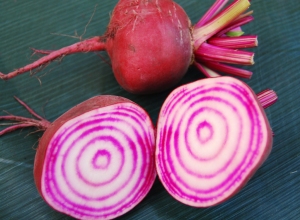 The famous stripes of Chioggia beetroot

Oh and it doesn’t matter how many times I see it, cutting open a Chioggia beetroot to reveal the famous purple and white rings is always a delight. Isn’t this a wonderful hobby!

3 responses to “Coming In and Going Out”

Allotment, garden and other stuff