It’s easy to forget about fruit. Certainly the fruits which grow in my garden seem to survive and produce with very little intervention. I know crops are better if you top dress, prune, give specialist feed and so on, but if you forget, all of a sudden it’s summer and little things start appearing.

With lovely warm weather this weekend, it was a pleasure to find fruit appearing on all of the:

The blossom on the blueberry bush has been replaced by small berries, still green for now. This bush gave two crops last year and I know it enjoys a dressing of manure so I’ll do that shortly.

Next to it, one of the two grape vines looks very much dormant. I might worry that it’s died, but vines seem to go quiet some years and then come back stronger than ever another year, so all is not necessarily lost. 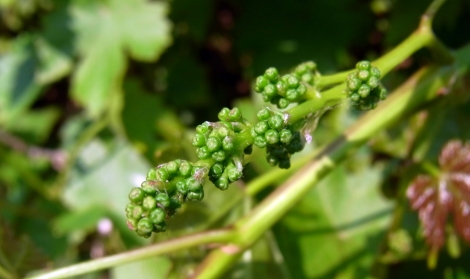 In contrast the other vine is flourishing, with lots of shoots and leaves winding their way along the cordon wires up against the fence. I’ll pick some of the young leaves while they’re still tender and use them as wraps for Greek dolmades.

At the other end of the fence is the fig tree, now a good couple of metres tall. I didn’t prune it at all at the end of last season, which is very neglectful and could have made for a messy summer this year with a mix of old and young branches. But aside from being very leafy it has lots of young figs growing on it, all still green for now but very plentiful and healthy looking. It’s this ability to perform without help that impresses me.

Figs climbing over the shed

The gooseberry bush is now bearing fruit too. The berries will turn pinky red later and last year were deliciously sweet and not at all tart like they can be. Something’s been stripping the leaves though; possibly a crawly thing nibbling them or else a bird ripping them (don’t even start me on what a pigeon did to my broccoli seedlings last week. Grrr..). So I’ll keep a close eye on the foliage and either put up some netting or apply some anti-pest stuff.

Elsewhere the rhubarb is getting huge, with lots of stalks all getting nice and red. I won’t pick them all; it’s wise to leave some stalks on the plant so that it can build energy to survive the winter. And there’s a small new plant next to the main one. As it’s in its first season I won’t pick any of the stalks. This is its strength- and root-building year.

That just leaves the strawberries, which I’m growing in three large pots. These are the variety Buddy and last year’s fruit were delicious. Now that the plants are in their second year they should give a bigger harvest – year one was modest – and I hope to see lots of flowers soon.

What to do with this lovely fruit later in the year? Well I’m thinking strawberries on scones, gooseberry fool, blueberries and ice cream, fresh grape juice, warm figs with goat cheese and rhubarb jam. Not all at the same time of course. Although now you mention it …