With the outdoor sowing season approaching, it was time at the weekend to give the raised beds a good clear and tidy up. Lots of small weeds and patches of moss came out and things ended up looking a lot better. 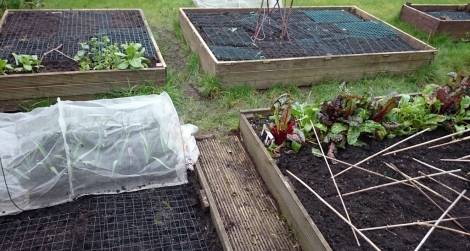 Tidied-up beds. The wire shelves and bamboo sticks are to keep the neighbourhood cat off

Still in the ground are a row of Swiss chard, which is flourishing in the higher temperatures (I confess to not realising chard was perennial), some pak choi, overwintered garlic and some spindly but still useful scarlet kale.

The next task will be mixing in some new compost and/or fertiliser and doing some digging – deeper down some of the soil is very compacted, which is great for the likes of brassicas where solid earth avoids the problem of root rock, but is a right pain with things like carrots needing light, soft soil.Oh and I also found a forgotten patch of lovely rocket, out of view behind the garlic tunnel. It’s completely untouched by slugs (how’s that for tempting fate), so I hope none of my slimy residents are reading this blog. 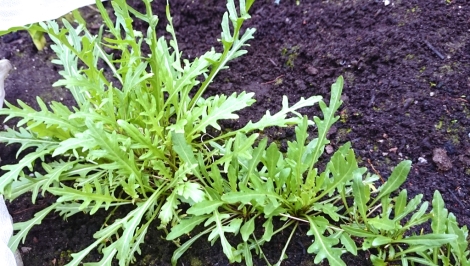 As a big fan of pulses I’ll be growing quite a few varieties of beans this year, including borlotti for drying and storing and broad beans for eating fresh off the plant. But the delights of dwarf French beans have booked themselves several rows in the beds too. Seed supplier Marshall’s are good for French beans, regularly introducing new varieties and running open trials where we can buy the seeds very cheaply in the hope that we’ll contribute useful feedback. A previous trial variety called Castandel turned out very tasty and is now part of my annual repertoire. And this year I’ll be trying a newcomer called Satelit: 99p and accompanied by a feedback form makes it well worth a go. 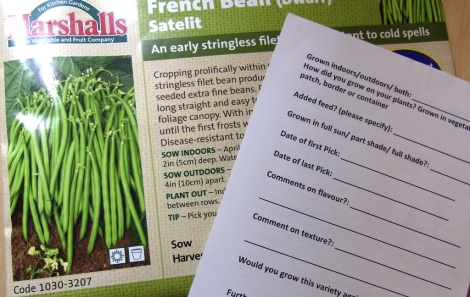 My full growing list for this year isn’t quite finalised yet but I’ve just added in some lavender seeds. There are effectively two types of lavender: ornamental and culinary. Most varieties could be used for either purpose but are better at one. I specifically wanted to grow a culinary lavender and went for the variety Munstead, said to be one of the best edibles and suited to the British climate. 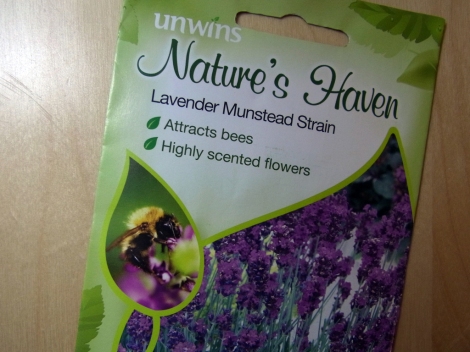 Once it’s in bloom the flowers bring a citrus-like sweetness to dishes and if you dry and properly store the flowers they keep they can be ready at hand at any time to add to biscuits, make lavender tea, mix with herbs like rosemary for roast meats and plenty more. The plants are also a favourite for bees during the summer, which is always a good thing.

Indoors the chilli and sweet pepper seedlings are almost ready to graduate from propagator to individual pots. I switched off the heat once they’d germinated and have left them to slowly grow in the light near a south-facing window. 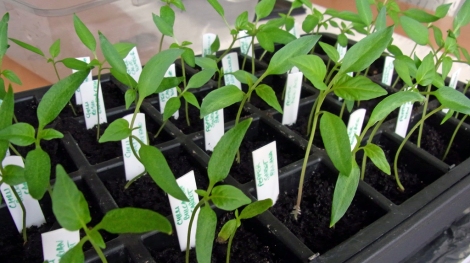 With a clear lid normally protecting the mini-plants I think it’s important to ventilate them for a few moments each day, just to give them some carbon dioxide, which they quickly exhaust in their confined micro-environment, and a general freshen up. I’ll pot the stems deep, so that they throw out side roots and start to thicken up. Replacing them in the propagators will be tomatoes and, well, lots of other lovely veggie things. More of which next time …

Inside my small indoor tropical garden...

I draw, paint, sculpt, take pictures and water my plants.