With warnings of a week of heavy rain about to begin, it was important to get some planting jobs done in the garden today. By way of setting the tone for the downpour I started by watering everywhere using a newly leaky hose, which appears to water the user as much as the ground.

After drying off I had a variety of lettuces to sow: Rosedale, Mazur, Little Gem and Iceberg. They were to go in the same bed as the garlic, which is growing strongly. Despite being a summer food lettuce doesn’t really enjoy strong heat or sun: in hot, dry conditions it will easily run to flower and even germination of the seeds can be compromised if the soil is too hot.

So a damp week is perfect to help the seeds germinate – keeping the temperature from getting too high and making sure the seeds are watered. Once they’re growing, the lettuces will be partially shaded from the summer sun by the garlic. Once the garlic is lifted later in the summer I’ll replace it with something else tallish such as some perpetual spinach.

I’ve sown the seeds so that the lettuces will be tightly packed together. They’ll only grow as large as space allows and a more compact, neat size suits me fine. It should also happen to look quite nice with the purple Rosedales among the green Little Gems and the frilly Mazur. 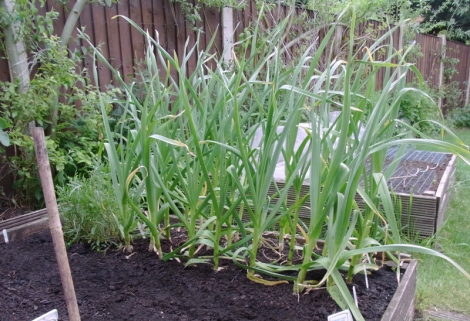 Between the lettuces and the garlic I sowed a row of reliable (there’s tempting fate for you) White Lisbon spring onions and another of Paris Silverskin pickling onions, because producing a jar of pickled onions is just one of those things you have to do.

On the opposite side of that bed I’ve sowed Oregon Sugar Pod mangetout. I’m hoping the dense rows of lettuce are sufficient to stop the mangetout and the onions and garlic from noticing each other. Companion planting lore has it that peas and onions are poor bedfellows and I can definitely vouch for that having once planted shallots alongside peas and the peas hardly grew at all. I pulled up the shallots and they recovered. You live and learn.

Nearby I thinned out a row of swede seedlings, which are just two weeks old. I tried munching one of the small green shoots and they’re quite delicious, tasting ‘green’ but ever so slightly warm/spicy. So all the pulled shoots are now in the fridge ready to go on tomorrow’s lunchtime sandwiches.

Swede seedlings needing to be thinned out

Swede seedlings needing to be eaten!

Another tasty treat today was some red-veined sorrel. An incredibly pervasive plant – it’ll disappear during winter then pop-up again healthier than ever in spring – its leaves are best enjoyed young, when they have a faint citrus taste, great ripped into a salad or quickly wilted as a base for white fish. But leave them to grow bigger and the taste becomes bitter. It’s recoverable by chopping the plant right back – new small leaves will appear again in no time.

At the other side of the garden the herb box needs a serious bit of coiffure. Apparently envious of the rampant rosemary, the oregano has launched a rival bid for herbal supremacy by growing furiously and spilling out all over the place. Luckily I love tomatoey Italian-style food so will always use lots of oregano and basil. 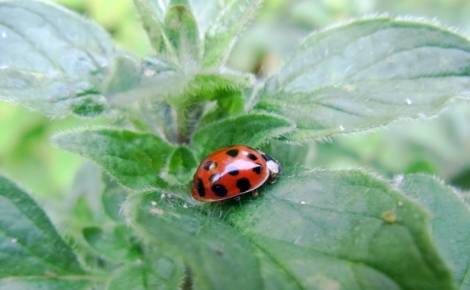 A welcome visitor to the oregano

Nearby, one of the mini greenhouse tents is now home to the chilli and sweet pepper plants. They were joined today by courgettes and cucumbers, both of which are in pots for now but I’ll plant them out in a couple of weeks once the weather’s settled again. 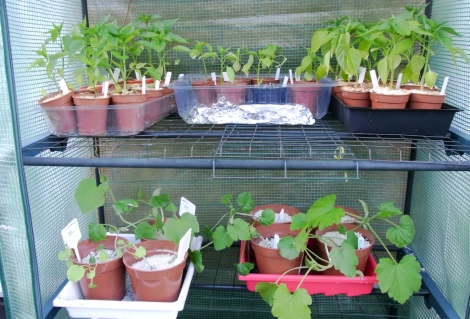 The handy red and white trays they’re sitting in are actually photo paper developing trays from when I had a darkroom years ago. I knew they’d come in handy one day. Just got to think of a use for the enlarger now..

And as soon as I pack away for the day there’s the charming sight of the resident birds returning to the garden for their evening forage. There’s a pair of blackbirds, some blue tits and a family of goldfinches all nesting in the tall bushes around the borders and just lately there’s been a crow, which I’ve named Russell.