This year, because a particular raised bed is still troubled by knotty roots from a green manure sowing a few years back, I planted seed potatoes in stand-up bags on top of the bed. Carefully topping up with compost and feed while the leaves grew, along with regular watering (think how damp a potato is inside and that water has to come from somewhere) together offered the best chance of getting a decent crop. 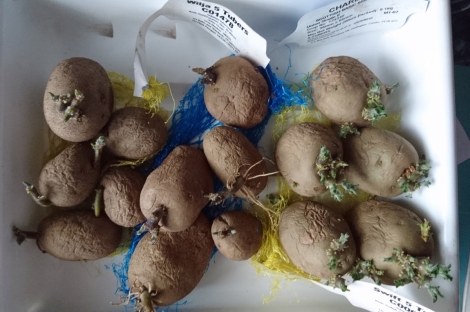 Potatoes chitting back in March.

I tipped out the Swift first early bag a few weeks ago. A modest harvest of about 1.8Kg or 4lb. They’re supposed to be a standard waxy variety, but on cooking them they seemed a bit more maincrop-like: soft and easy to crush (if you’re a hipster / ‘mash’ if you’re not). They’re nice and tasty though.

This weekend, after four and a half months’ growing, I tipped out other two sacks – one Charlotte and one Wilja. Charlottes, which are classic early: waxy and smooth skinned, are always a favourite for their great taste so I was very pleased to get 2.1kg / 4.5lb of them, all in perfect condition.

The Wilja variety was a first-time grow for me. A second early, it’s said to be very tasty and a great all-rounder for boiling, roasting or chipping. So it was great to find a good 2.3kg / 5lb crop among the soil. Some are big enough for baked potatoes, so that’ll be a must try in the coming weeks.

All bagged up for storing

Meanwhile they’re now in brown paper bags in a cardboard box in the dark, to keep them in good condition and I’ve covered that bed with weed control fabric to try and kill off some of the troublesome green manure roots.

No vampires round here. A great crop of Provence Wight garlic.

Also lifted this weekend was the garlic, whose leaves had been perishing for a while so the time was right. This year I grew the softneck variety Provence Wight: not especially exciting, but when I’ve grown the more exotic hardnecks in the past they haven’t kept for long after lifting. So it was great to find that caution paid off in the shape of fourteen huuuuge (by my standards) bulbs, some the size of an apple. They’re hanging up to dry now, before going into the garlic storage bag, but I’ll have a go at roasting some of the potatoes above with some of that still ‘wet’ garlic and some of the rosemary in the herb bed. I could devour a plate of those just on their own.

Lots of chamomile flowers growing at the edge of one bed. Destiny: teabags.

Also drying is a load of chamomile flowers, picked yesterday. I grew the chamomile specifically to make tea with and what started as a sprinkling of seeds in one cell of the heated propagator back in May turned into a big spray of white and yellow flowers in one of the beds. The flowers are now drying in the dehydrator (would do outside but storms promised for later) and I’ll pick and dry some lemon balm too, maybe even some mint, to get some nice mixes going and fill some custom tea bags.

.. and drying in the dehydrator to make tea bags.

The chamomile patch has lots of new flower buds so looks like it’ll keep producing. Similarly, the Castandel dwarf french bean plants yielded a good crop the other week – I’ve three rows of them – but still have more flowers and tiny beans to come, which is wonderful. In another bed I have some black eyed beans and black turtle beans and have been picking a few young ones each many an evening to chop and have with dinner (upvote here for microwave steam bags! .. beans cooked in seconds). 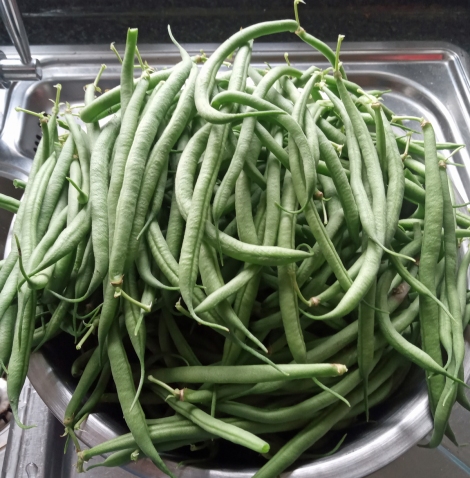 Nearby are three rows of Sutton broad beans. I sowed these directly in the bed quite late: mainly on 21st May and then more two weeks later to fill gaps where some hadn’t sprouted. Late but still a completely viable timeframe, which means I’ve lots of yummy broad beans still to look forward to rather than already having wolfed them all. 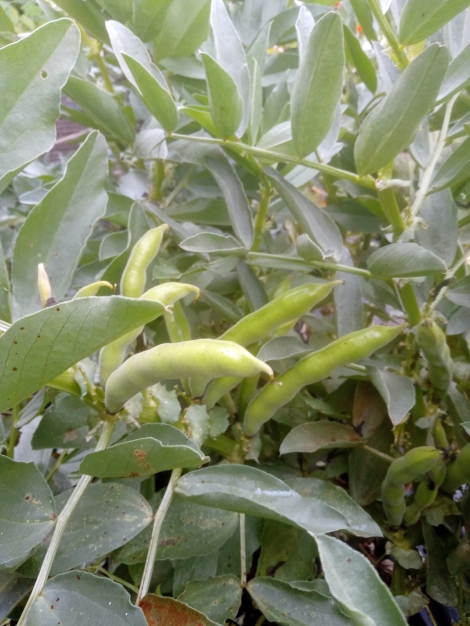 .. with the rapidly growing pods hidden away among the leaves.

One of a pair of busy ‘Tuscany’ courgette plants.

At the same time I’m picking away at two prolific courgette plants. The annual courgette glut faced by many GYOers is a nice problem to have in my view. The Tuscany variety I grow is delicious sliced, seasoned and fried in a little EVOO as a side dish. A bit of chilli goes well with that and in the tent greenhouses there are three Medina chilli plants and three Ace sweet pepper plants, each toting up to six peppers, some of which are just starting to turn red.

‘Medina’ chillies, still green for now but will turn red (and fiery) soon

Likewise, only a few tomatoes have ripened so far but they’re starting to turn from green to res. I’m growing three varities:

The tomato and peppers were all grafted plants I bought, rather than growing from seeds. The results I got from grafted toms last year were so good I took the same approach this year. There were plenty of other things filling the propagator trays back in the spring, herbs in particular, and there are some late season seeds I’ll be sowing indoors soon. Especially with some great new grow lights I got a while back.

On the fruity front, a pink blueberry plant is putting out a reasonable crop in its first year and there are lots of grapes growing, after a poor showing last year. I’ve no idea why these grape vines have their off years and on years, but it’s a good job I’m not running a vineyard.

Grapes starting to plump up. There are lots of bunches like this. 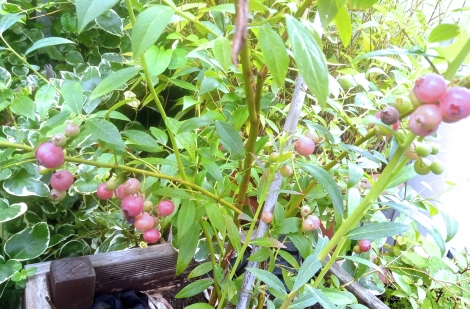 But next to sow will be some lettuces, radishes and overwintering spring onions – all going into gaps in the beds in the next week or two. As you can see below, my veg growing area can look a bit of a mess but you can always squeeze more vegetables in. A bit like myself really: I’m off to pick dinner 😊

7 responses to “A matter of taste”